Proof, as if there were ever any doubts after the author's award winning debut novel, Shadow Jumper, that J.M. Forster gets right into the heart of stories featuring young people who just so happen to have health issues.

A mystery (someone knows Mallow's 'secret' but who?) but, for me, firstly a foremostly, a novel of discovery, of coming to terms with being you.

Bad Hair Days is a wonderful read but more than that its inspiring. Its main character, 14 year old Mallow, a revelation to all those who feel as if they don't fit in, that they too are different.

Marketed at an audience of 10 to 12 year olds, its a gripping, emotional, sensitively written read featuring so many issues including bullying, family, friendships, insecurity, all wrapped up in a story about a teenager who as well as dealing with all the 'usual' teenage angst is having to cope with the emotional (and practical) issues of having the hair loss condition, alopecia.

In short, its exactly the sort of thought provoking story that I'd encourage all children to read.
​
Tracy Terry at
pettywitter.blogspot.co.uk/
​
'Bad Hair Days is a really beautifully written book and is another page-turner. It has the mystery of who is sending the messages and it is a real nail-biting climax. But in between the mystery, is a tale about friendship, family, the effects of bullying and about dealing with being different.  Mallow is a really likeable character and as you read the book, you want her to come to terms with her condition and have the happy ending she deserves.
J.M. Forster has a real knack for choosing interesting protagonists and in the case of Mallow dealing with alopecia, not only makes the story interesting, it adds another dimension to the book showing the reader how it feels to be different from everyone else.  It also gives an important message that in a world where looks are so important, it is what is on the inside that really matters.' 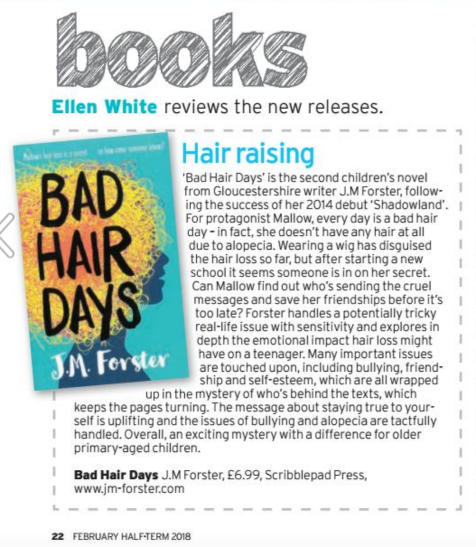